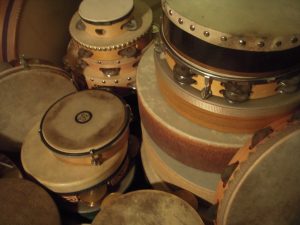 Most drums can be categorized by their shape. For frame drums, there’s just a round hoop or frame for the head (or heads) to attach to and to hold onto it while playing, there’s not a big resonant body. Examples of some frame drums are bodhrans (Irish), tars (North African), and tambourines (all over the world).

Frame drums are some of the oldest, most common instruments. There are traditional frame drums found in almost every remote region and culture of the Earth. They are said to have originated from common grain sieves. Workers sifting grain and singing songs to pass the time while batting the mess on the bottom of the sieve rhythmically to the voices to knock the stuck debris out, hence adding to the rhythmic pulse and forward momentum of the music and of the workday. Once the mesh was worn out and unusable, you could stretch an animal hide across it and devote it to the after supper music jam.

The tambourine is a form of frame drum with zils (jingles or little cymbals). Some frame drums have rings attached like the Ghaval, Daff, and Doyra; some have gut wires (similar to snares attached) like the bendir. The Irish bodhran is one of the most common frame drums people in the West come across. It is played with a tipper (short stick) in one hand and usually has a crossbar connecting the frame behind the main playing side of the drum head for the other hand.

The following frame drums are one that David teaches at the professional level: the Lap-Style or “on the knee” frame drum (in the lineage of Glen Velez), the Tar (North Africa), the Bendir (Morocco), and the Riqq (Lebanon).

David also teaches the following frame drums at a beg 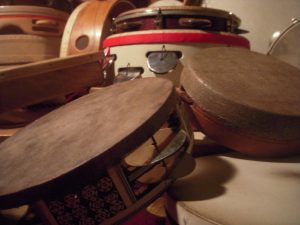 Layne Redmond wrote a book on the history of the frame drum called, “When the Drummers were Women”.